John Fox is R-rated to the bone and always great for a healthy nose snort. It remains a mystery to us why Fox never achieved household-name status. Maybe we’re biased, because Fox was the first stand-up we recorded in 1987. The grand successes of his recordings encouraged us to jump into the deep end of the comedy recording pool. His comedy is as timeless and hilarious today as it was then. Like John told us when we recorded him in Indianapolis, his album is not topical and will be bought by comedy aficionados forever. Check out his albums “John Fox” as well as “I’m Fat, I’m 40.”

Part of what made John Fox a comedian beloved by so many listeners was his relatability. Fox spoke to everyday experiences we could all relate to and told them in a distinct everyman fashion, like a friend at the bar buying you a drink so he could tell you a tale. A John Fox story might be a bit coarse, but it’s never a story you forget.

John Fox comedian was born and started life as John Edward Moore on April 24, 1953, at Camp Lejune in North Carolina, where his father was stationed. He spent much of his early life in Illinois, where he developed a lifelong love of baseball, namely the Chicago Cubs. He held his first show at the World Famous Comedy Store–the legendary comedy club located on the Sunset Strip in West Hollywood. This was a bold beginning for a man known as the “Nick Nolte of comedy,” and it kicked off a long and fruitful career.

Fox was a perpetually popular guest on stand-up comedy specials in the 1980s and 1990s. He showed up on the beloved Star Search, which launched a significant number of iconic comedians. Among these were shows like Make Me Laugh and Showtime Comedy Club Network. Fox also appeared on video compilations, such as Truly Tasteless Jokes and Comedy’s Dirtiest Dozen.

Not only that, but Fox was lucky enough to work with some true legends too. Fox worked with Rodney Dangerfield on the HBO special Opening Night at Rodney’s and even had the thrill of voicing a pig in Dangerfield’s animated family film Rover Dangerfield. Being an early blue-collar comedian, Fox had the opportunity to appear on the initial Redneck Comedy Roundup DVD, which put him in the company of Bill Engvall, Jeff Foxworthy, and Ron White.

Alas, Fox succumbed to colon cancer in 2012. He was the first comedian we recorded at Laughing Hyena and we were devastated to see him go. He left behind these albums recorded at the peak of his career to enrapture his old and new fans. Fox’s Fox was a good personal friend of Bob and Tom who appeared on their radio broadcast often and was a show favorite.

In one of the few interviews he did, Fox made up a story about why comedians following him in the comedy condo should steer clear of the mayonnaise jar. Upon meeting new comedians after that interview, he always clarified that the mayonnaise was indeed safe to use. To this date, the mayonnaise jar has never given consent. A further example of his wit can be found in “Archibald Barasole” off John Fox’s self-titled album. In this, you’ll hear a crude but familiar story as Fox recounts an experience every class has had of a student talking back. Classmates state how to spell their names phonetically, with examples like Mary Smith giving her name cleanly. Then it’s time for Archibald Barasole to give his name, and with vulgar flair, he offers it in the raunchiest fashion nobody will ever forget hearing. Fox’s raunch was something he was a master of, as you can hear in this crude excerpt from “I’m Fat, I’m 40.”

There was no topic too far for Fox to cover, from pornography to his sexual exploits. Despite the subject matter, Fox always had a warmth and charm that made any topic, no matter how adult it got, feel warmly likable. He was a lovable presence whose good nature always shone through in his work. These albums are a fitting tribute to John Fox, one of the funniest men we have ever met. 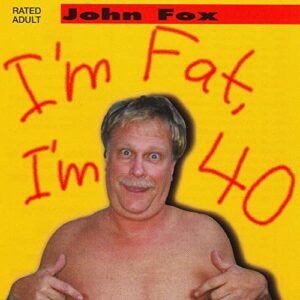