Ladies and Gentlemen: Laughing Hyena Records is proud and excited to present Collin Moulton, a family man, with his latest comedy CD… “Cowlicks”.
Collin lives in Los Angeles with his wife and two children. He was raised in Wisconsin. After school was over, Collin toiled as an auto mechanic. He was always funny and one day his wife encouraged him to try his hand at a comedy club open mic. His first gig was at the Laugh Factory in L.A., and he was off to the races. He has played comedy clubs all over the U.S.A. and has done many television and radio appearances, capped by his own Showtime Special! And he is always hilarious on “The Bob and Tom Radio Show”. He always steals the show.
Collin has all the tools for stardom, so he definitely is one to watch. Here is “Cowlicks”, your new favorite comedy CD. Play it often and laugh a lot. 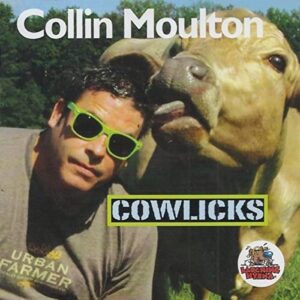