Ollie Joe Prater was one of the first great rural comedians and a reminder that good ol’ boys came from everywhere. He hailed from Michigan and used his comedy to delight crowds with stories of his experiences. Anyone could relate to the way he told his stories, regardless of whether they lived in the north, south, busy city, or great outdoors. Prater united us in laughter, though he knew how to calibrate his act to specific audiences as the best comedian.

Comedian Ollie Joe Prater was a unique figure. Though he never managed to achieve the fame of many of his peers, he was a popular figure among those who took standup seriously in the 1970s and 80s. You can find the CD “The Best of Ollie Joe Prater” right here at Laughing Hyena.

Prater (born Gilbert Hartzog) came from a tradition of character comedians. The character he created was a hard-drinking, hard-living, uneducated man who was proud of everything. And by all accounts, it wasn’t much of an exaggeration for the swaggering man with the bold beard and mustache who commanded many a room.

Ollie Joe Prater’s golden age came during the golden period of stand-up comedy in the 1970s. He was manager of the legendary Westwood Comedy Store—one of the legendary epicenters of humor—in the decade where all of the biggest names, such as standup icons like Robin Williams and Richard Pryor, would frequent alongside late-night legends Johnny Carson, Jay Leno, and David Letterman. Prater had the great fortune of being right in the midst of all of this.

Prater thrived in this scene, but was destined to go beyond. He recorded several albums. He inevitably went on the road, finding a major following across the United States. One of the places he played best was in Las Vegas, where casinos frequently employed him. Prater popped up on a wide variety of TV shows. He appeared in the cult comedy Can I Do It Until I Need Glasses? He even had a delightful ABC special, too!

There’s no doubt that Prater was a bold figure. Unlike many of his peers, he fared poorly on TV because of how raunchy his act could get. But that was fine with him. He loved the road, heading to his most popular cities thrice a year, and visited over 80 towns annually. Ollie Joe Prater loved his comedian career, and he’s still a fantastic voice to listen to today.

The thing that made Prater so great is that he took a scientific approach to his work. Prater would watch his work, figure out a perfect tempo of three to six laughs per minute, and switch it up to keep things fresh. Comedy was hard work for Ollie Joe Prater, but crowds ate it up.

Ollie Joe Prater was certainly one of a kind. He might not have been the biggest name in comedy, but he was a comedian whose work was known within comedy circles. He was known by the brightest lights in comedy, and his work remains profoundly influential over thirty years after his untimely passing. Laughing Hyena Records is proud to keep his career alive today. Ollie Joe Prater is one of the first comedians we ever recorded, and one of our long-time favorites to this day. 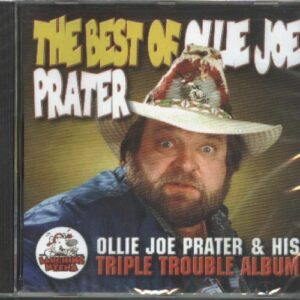